Their interactions had always been strictly professional, he never tossed a playful tone or pet name into their conversations; she appreciated that. Kyle had always been friendly and polite, but all business. She had pegged him as having ADD within 5 minutes of meeting him for the first time; noticing his inability to maintain focus for very long and his flitting from topic to topic quickly. The couple occasions they had met in person were short, direct meetings to discuss and address business and ended with nothing more than pleasantries exchanged. He was attractive and charismatic although not really Jasmine’s type. She had assumed he felt basically the same way; she could sense when a guy was not into her and that wasn’t the case here. The chemistry was present but not thick, although attraction was never indicated or eluded to on either side. It stayed this way for some time, neither side using the obvious chemistry to gain favor with the other. The business relationship was built on mutual respect and good business. As is common, friendship developed out of that business foundation. But really just the casual acquaintance kind of friendship, nothing more than superficial commonalities.

They typically spoke often, several times a week about business. Kyle had checked in on her a few times when she had taken some time away from work but nothing more than cordialities. It wasn’t uncommon to get a late night call or text from a client or friend, but this was the first time he had ever messaged her so late. It was innocent enough, “I’m going to be in your area a couple days; we should try to have lunch”. A few texts back and forth and somehow, quite subtly, the tone was changing. Jasmine didn’t date people she did business with, as a rule. She always quickly shut down any advances or flirtations directed at her, but not this time for some reason.

Butterflies? Are you serious right now, it is lunch with a colleague and you are worrying about what to wear and feeling anxious? Are you 12? All this self-talk was not helping, not changing the fact that Jasmine was definitely feeling something. Paying a little more attention than usual to her makeup but not enough to be obviously over-done and carefully choosing something slightly more casual than her usual business attire she started the drive that divided the before and after parts of their story.

As Jasmine made her way through the casino toward the restaurant her thoughts flitted around all over the place and her mouth was unusually dry. It was such a weird situation, not knowing anything personal about someone that you’ve talked to several times a week for the past year. She was a little annoyed at the awkwardness of it all.

Kyle was already sitting at the bar when she arrived, as he saw her he stood up and walked toward her. “We have reservations, are you hungry now or should I ask them to hold the table?” his voice was smooth, calm and warm; she hadn’t noticed that before. Their meetings had always been short and direct with very little small talk. “I am hungry, but not starving so we can eat now or wait. I am fine either way” she responded.  Kyle motioned to the hostess and they were taken to a quiet area in the back of the restaurant. As they walked Kyle placed his hand on the small of Jasmine’s back, she couldn’t help but realize this was the first time he had ever touched her.

It was a very nice restaurant, one of the nicest in town. Kyle ordered another drink while Jasmine looked at the menu. He made suggestions and ordered for both of them like a perfect gentleman, not what she was expecting from just a friendly lunch. While they talked over what really was more of an early dinner; Jasmine was amazed at how smoothly conversation was flowing. Kyle told her about how he started his business, what he had learned from his mentors, things he had changed and made his own. They talked about their lives, families, children; everything you could think of got brought up at some point it seemed, but with a natural and comfortable flow. When dinner was finished he asked if she would like to go see a show. Jasmine declined saying that she hadn’t planned to stay in town that late but that they could sit in the casino a while or visit at the bar.

Kyle reached for her hand as they left the restaurant and headed to the casino, Jasmine’s stomach flipped over and back again but there was something so calm about Kyle, something she had never seen in him before. “What do you like to play?” he asked. “I like Craps and Roulette” she wasn’t really in the mood to play; but she’d had some wine with dinner and wanted to let another hour or so pass before she had to drive home, so she had time to kill. They settled on Roulette and sat down at the table together. Kyle was a bit more forward now, that fourth Appleton Rum he’d ordered after dinner giving him a little more flair. While they talked and played he rested his hand on small of her back so naturally as if that is where it had always belonged. After some time Jasmine noticed they were sitting very close and her hand was resting on his knee. He leaned over and kissed her and went right on talking like it was not out of the ordinary at all. In fact Jasmine noticed that the only thing that seemed out of place about the whole thing were the thoughts in her head, thoughts of questioning why it all seemed so normal. Somewhere in the excitement of it all she ordered another drink without thinking about how she would now have to wait longer before she could drive home.

After a while the conversation started to turn more to future plans, things to do together, the next time he would see her and so on. Somewhere between all of that it started to seem as if this was no longer a first lunch, no longer even a first date somehow there was talking about things that sounded like they already had plans to make this something more. Jasmine’s head was swimming in the swirling school girl hormones and the two glasses of wine and she kept reigning herself into reality and then swooning and swirling again.

In the middle of all this talking and laughing and all this ‘feels so natural’ comfort, Kyle was talking about kids and families and that Appleton Rum got the best of him and he said “when we have a baby”. For a lot of woman a baby with a wealthy man might sound like a good idea; but for Jasmine that is not a topic to toss around lightly and certainly not on a first date, or whatever this was becoming. 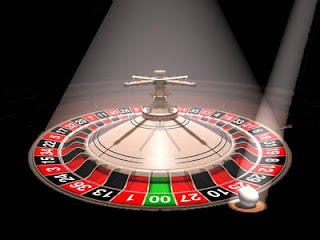 She retorted quickly with “no babies if we aren’t married”. It just leapt out of her mouth before it even dawned on her how crazy this entire thing was sounding. To which the response was “ok, pick a number and if it hits we’ll get married”.  “Ten” she said, again the response leaving her mouth before she could even think to not respond. “Everything on ten” Kyle said, placing his stack of chips right on the number 10.


What are the odds? Honestly, all that lining up just like that. The perfect evening, the almost magical connection between them. The crazy talking about a future and somedays and then a baby and marriage; and then actually hitting on the number 10; unbelievable really.

Maybe if they had actually ran off to the chapel that night, maybe when the Universe lined everything up so perfectly for them if they had just taken the leap; maybe then it would have worked. Maybe everything would be different now. Maybe all the magic of that night would have carried on forever. Just Maybe.